Thank you so much for all your support this last year. This letter is to update you with news from, and our projects in, Nainokanoka. This is the ‘ward’ we are working in, which comprises of 3 villages, each of around 4-5,000 people. Some of the news is distressing, but you have helped to alleviate this distress, as you will read.

2009 was a very difficult year for the Maasai in the Ngorongoro Conservation Area (NCA) and their troubles continue into 2010. UNESCO threatened The Ngorongoro Conservation Area Authority (NCAA) with removing the Ngorongoro Crater from the list of World Heritage Sites. This is because of the erosion caused mainly by tourism. UNESCO were not happy with the mass tourism policy, proposed major hotel constructions, tourist traffic congestion in the Ngorongoro Crater and the numbers of Maasai cattle and the small amount of cultivation which the Maasai were practising. Anxious not to lose their status as a World Heritage Site, and consequently lose tourists, the NCAA banned all agriculture practised by the Maasai and have reduced the numbers of cattle they are allowed to keep. Tourism has not been reduced.

This ban has meant that the Maasai have not been able to grow any food, and consequently they are hungry and rates of malnutrition and death have risen, especially among children, much higher than among people outside the NCA. It is a misguided ban, both in terms of human rights and in terms of ecological dynamics. While human population densities have risen, livestock numbers have not. Alongside failures in health, education and infrastructure provision to NCA Maasai this creates food and livelihood security problems. At the same time research in archaeology, history and ecology show Maasai pastoralism has been in harmony with the wildlife for hundreds of years and continues to be so.

However conservation methods restricting the activities of the Maasai have created problems. For example, once Maasai were evicted from the central crater, the rhino population there was eliminated by poachers allegedly linked to corrupt conservation officials. Also the Maasai used to practise limited burning of the rough grasses, as would occur naturally. This enabled other grasses to grow which were good for both cattle and wildlife grazing. Now this practise has been banned the area is being taken over by rough grasses which are inedible to both the wildlife and the Maasai cattle.

The problem has been compounded by drought. To help this crisis in the short term WTWT made the decision to send food aid during the drought at the end of 2009, in the form of money with which our coordinator has bought and distributed maize to the most destitute families. We are now planning to fund goats for these families as a longer-term solution.

Recipients of our food aid 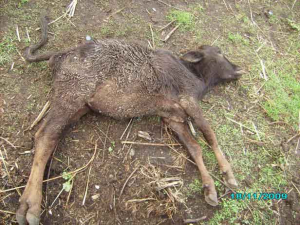 Cow thin from the drought

When the rains first come compromised cows continue to die because they cannot cope with the cold from getting wet.

WTWT are funding students to secondary school who are unable afford the fees and so would otherwise be unable to attend.

The Maasai are trying to stand up for their rights, but it is difficult when the village leaders have not had the benefit of education, and are often persuaded to sign things that they do not understand. They have recently held a meeting where a lot of possible options were discussed. One was that the Maasai take more control of their lives by standing up for their rights to land, food and clean water. They propose achieving this by the younger people with an education liaising more with the leaders and going with them to important meetings to ensure everyone is aware of what is being planned.

The NCAA has an obligation to care for the local population within its boundaries. Educated Maasai will try to ensure that these obligations are met. By funding children to secondary school we are helping empower the community to improve their own lives. 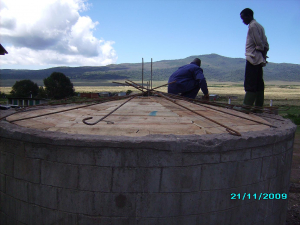 Provision of clean water sources continues to be WTWT’s priority at the moment. In addition to wells we have been involved in other methods of providing clean water. In 2009 we completed a rain water collection system at the local primary school. We have now completed surveys for gravity pipelines to bring water down from sources higher in the hills. We are waiting for permission to go ahead from the NCAA. The stand pipes from this system will provide water for several thousand people in areas without wells. As with the wells, the Maasai themselves will provide the labour and local engineers will supervise the project. 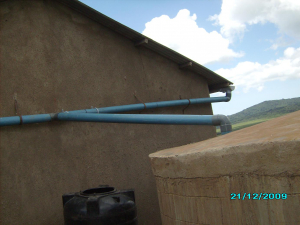 The repaired guttering and pipes

This year WTWT have also provided simple fuel efficient ‘Rocket’ stoves. The innovative design won an award last year, as they use at least 60% less fuel than open fires and so are ideal for use in the developing world. They ease the burden of collecting fire wood and protect the environment from deforestation. There is much less smoke produced and so they also reduce the chronic lung disease present in so many of the women, caused by breathing in too much smoke over many years.

If any of you would like to make a donation towards our projects, or set up a standing order, our bank account is:
‘Weston Turville Wells for Tanzania’ account number: 00087400, sort code 30-90-38.

Cheques can be made payable to ‘WTWT’ and posted to our address below.

July 2011 Newsletter – Goats, Secondary Education and an Appeal for a...
Scroll to top