I have just returned from another moving visit to our projects with the Maasai people of Ngorongoro. On this visit I had Hans van Driel, Chairman of Kidshare www.kidshare.nl and Marco Visser (Trustee) with me for 2 days with a view to Kidshare sponsoring preschool education in the area.

The visit was moving because of the effort the women had taken to get to the gatherings. In Sendui some had walked 14km from the most distant sub village. Our staff had warned me that it was a difficult time for the women at the moment and it may be that not many would be able to come to meet me. This is because of the complete failure of the usual November/December rains. It meant that people had lost cattle and the women were having to go further to graze their livestock and collect water.

I wouldn’t have guessed their problems by the numbers who were there, singing and dancing in their welcome greetings. The group leaders were confident in speaking about their groups, how well they are doing and what a difference it has made to their lives.

I recognised one of the young women, Midingie, as I had met her back at the start of our work in 2006, before she had children, in Irkeepusi village. I remembered her because I had used her photograph, holding her sister’s baby for one of our WTWT cards. Since then she has had 4 children of her own and was widowed a few years ago. When our staff first met her they were struck by her motivation and knew she would respond well in the program, which she has. 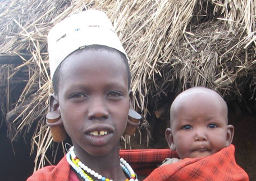 Midingie 2006 with her sister’s son 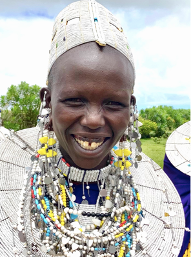 Midingie in 2022 now having 4 children of her own

The women from Sendui told us that there was no health care provision in their village and it was 20km walk to reach the dispensary in the next village.

They requested we help them fund a dispensary/medical centre for basic health care.

Some of the destitute women from our area have been begging in the town to try to get food for their families. I found it very painful to hear about as often men do not donate for free and the women are having to prostitute themselves.

The women, our staff and the community asked us to fund the renting of land outside the conservation area where these women could farm maize as an alternative to the humiliation and distress of begging and prostitution. They have also asked for a maize grinder to enable them to make more profit by selling it as flour. Again if any of you would like to donate towards this project details of our bank account etc are at the bottom of the newsletter.

The community explained their great need for preschool education to enable their children to progress successfully through their education with the benefit of knowing Swahili from the start.

I was able to visit the preschool we funded in Ngoile ward, where now the children have seats to sit on rather than stones: 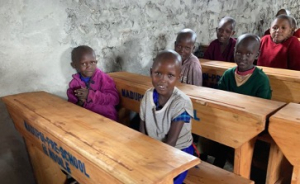 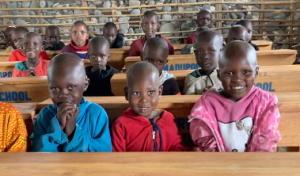 I visited Irkeepusi Primary School to see the health club and numeracy and literacy classes being held there for the loan women. While I was there they showed me a partially built toilet block. After the failure of the November/ December rains and the loss of many cattle there was a sudden downpour in January which washed away all the toilets at the school. This left all 600 pupils without a toilet. By the time I got there they had constructed half of a new toilet block, but run out of funding. WTWT have now donated towards the completion of this urgent project.

The school headteacher with his list of requests,  the most urgent being the completion of the toilets

We are hugely grateful for all your financial support and encouragement. Without you we could not do any of this.

As always, our flights and administration are paid by ourselves, so all of your donations go directly to the community projects.

If any of you would like to make a donation to our projects or set up a standing order, we would be extremely grateful, as would the people in Ngorongoro: