NEWSLETTER January 2013
Dear Loyal Supporters
Having started with clean drinking water as a priority to help the Maasai people in this area, we are increasingly finding that successful education is crucial for them. This will enable them to be able to solve their own difficulties and climb from poverty. I have recently returned from a trip to Tanzania to see the new preschool classroom, to meet the secondary school pupils and to see the waterpipes.
Pre school
As we approached the preschool classroom I thought it looked rather small and unfinished and I wondered if the children had started after all. Then we went inside … it was beautiful and all the little children got up and started singing the alphabet for us in English and then Swahili. Quite an achievement for only having been in school for a few days. It was very heart warming and encouraging to see the children in there and learning. As they are so young they will just be doing mornings, enabling more children to attend in the afternoons. When they start primary school next year they will be well prepared for the lessons taught in Swahili. Our plan is to build another pre-school this year in another sub village. 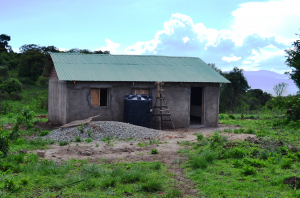 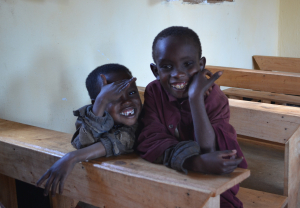 Some of the first pupils 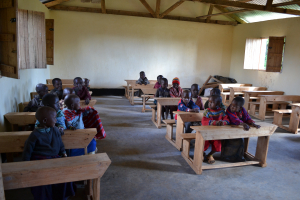 The first week in the new preschool January 2013

After this visit we went past the previous preschool which they had constructed from local materials. It had fallen into disuse form being so dark and too small for many children. The blackboard was a piece of black cloth. 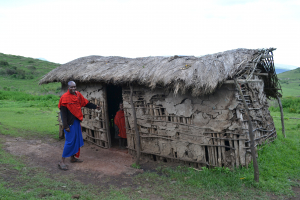 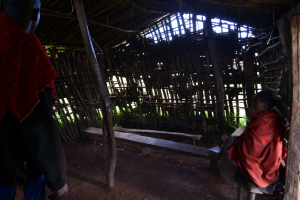 The dark interior of the old preschool

Water pipes
While there I was also able to see the new water pipe which has been brought down from the Munge River to the new secondary school and on to the primary school and medical centre in Irkeepusi. WTWT funded the plans for this pipe system. I was delighted to see that they had now been used. It has been difficult persuading the Ngorongoro Conservation area authority to fulfil their obligations of providing for the local community as well as the wildlife, so this pipe is a major achievement. It doesn’t go to all areas of the community yet, but we are pushing for it to be extended. 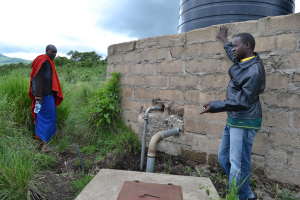 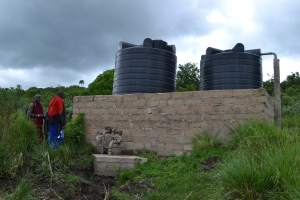 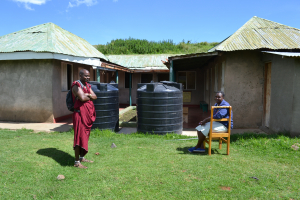 Tanks at Irkeepusi dispensary, filled by the Munge pipes

Secondary Education
This year the pupils of The John Colet School, our local secondary, chose to support our charity. During their ‘help week’ they raised a fantastic £ 2393.27 to fund 12 pupils to secondary school. It was great to visit the secondary school in Nainokanoka serving the villages in our area, and to meet the students that we are sponsoring. 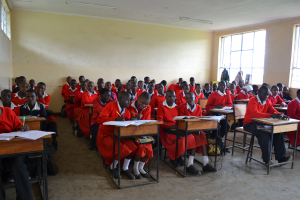 Microfinance loans
The businesses funded by our microfinance loans continue to be successful. The women are doing particularly well with their retail shops, not only able to take a salary for their immediate family budget, but also able to save for emergencies such as medical care. The loans are all on target to be repaid by June this year. We then plan to reloan to the same people for another year, and train a new group of 25 people. The women with the loans came to greet me and thank us all with gifts of their Maasai jewellery. Likewise I also met women who had received goats coming with their gratitude for me to pass on to you all. 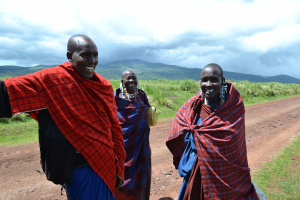 Embapa, one of our staff, with women who received goats from WTWT. They came to thank us 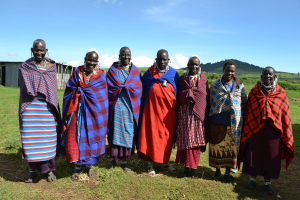 Women who have started small businesses with their loans from WTWT

With much love and thanks for all your giving, enabling this work to help others to be possible.
Rachel and all at WTWT in UK and Tanzania

If any of you would like to make a donation towards our projects, or set up a standing order, our bank account is: ‘Weston Turville Wells for Tanzania’ at Lloyds TSB, account number: 00087400, sort code 30-90-38. Cheques can be made payable to ‘WTWT’ and posted to our address below.
Rachel Blackmore
Weston Turville Wells for Tanzania (WTWT)
Registered UK charity No: 1125141
Registered office: Old Crown, West End, Weston Turville, Aylesbury, Bucks, HP22 5TT
Email: racheljblackmore@gmail.com
www.wellsfortanzania.com
Phone: +441296 614751 (land line) or +447792 475094 (mobile)