Dear Loyal Supporters
I have just returned from another moving and useful visit to our projects in Ngorongoro, Tanzania. This time our children came with us, which was really helpful. We were able to discuss things together with our co-ordinators Ponja and Embapa and to hear about community plans for the best way forward. We visited the preschool, attended the second loan training WTWT have run and met some of the secondary school students that we have sponsored. Our children enjoyed staying with Ponja’s family and experiencing the Maasai culture: taking the cows out to graze, throwing spears, jumping high in dances, making fire from sticks and hay, slaughtering and roasting a goat and sitting around the fire with the family in the evenings in the traditional home. 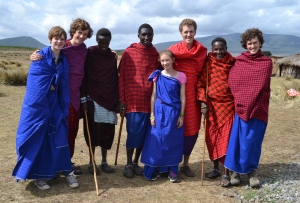 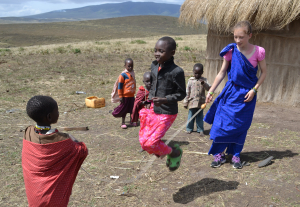 We have been fortunate this year in having the enthusiasm and support of ‘The Big Top’ Preschool in Bedgrove, Buckinghamshire to link with our preschool work in Irkeepusi. The Big Top raised over £140 during their fundraising cake sale at the end of last term, to be used for the preschool in Irkeepusi. They also gave us gifts to take to the children, which we enjoyed sharing.

A notebook from the Big Top gift box 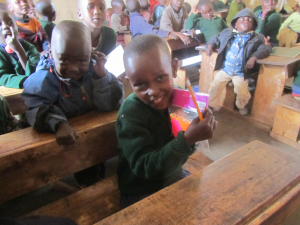 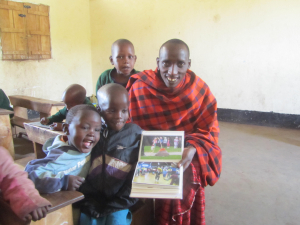 The preschool children are doing really well and learning quickly. When we arrived they sang us the English and Swahili alphabets, as well as counting a long way in both languages, which they will need for their continuing education. Learning is currently formal and by wrote, but this is an area in which they can gain support from organisations in Tanzania to use more varied methods. When the children start primary school next year they will be well prepared.

The community are planning another pre-school in Nainokanoka village and have requested our funding, which we have budgeted for. They have also started a preschool in Nainokanoka ward using the church building. Eleven more are needed to cater for the needs of the thirteen subvillages of Nainokanoka ward, so there is plenty to work towards! There are parents committees for the preschools and the parents contribute towards the salaries of the teachers. The government is encouraging these sustainable initiatives, as they do not have the resources to fund preschools at present.

There are not enough primary schools for the area and those that exist are heavily oversubscribed. The community have requested us to fund and organise the building of  two primary classrooms, one in Loresho Juu and the other inEmburbul. Starting a school serves as a trigger for the government and the community to fund the completion. We don’t currently have enough funding for these, but hope we will be able to do this in the future.

Second Microfinance loans and training
When we arrived for the business training we were met by a wall of grateful women singing and dancing, who engulfed us with hugs. The loans are obviously something they are very keen on! The training this time was given directly by our coordinators Ponja and Embapa, in their Maasai language without having the delays for translation. There was a lot of interaction and humour. All the borrowers shared their business experiences with each other. One group started selling livestock, but switched to maize when the livestock prices fell. Having their own successful businesses is a huge help to them. These women are now able to afford to send their children to school and to give their family enough to eat. 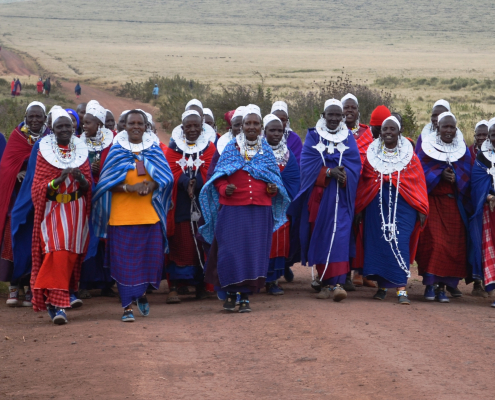 Women who received loans singing as they came to greet us 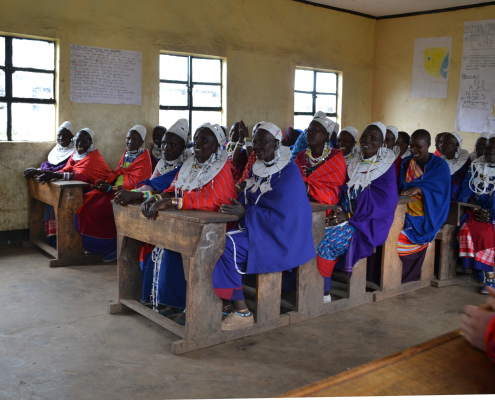 The businesses the women and men were able to start, following our loans, in June 2012 were successful. All loans were paid back and all people made savings to a greater or lesser degree. Those who made more savings and coped well with the pressures of running a business requested further loans. A further 60 people also requested loans. We were able to train another 43 this time, some having second loans and others starting for the first time. At first they were all given a huge amount of support with their businesses and record keeping by our project manager for loans, Embapa, and our two women co-ordinators Peesoi and Julianna. As time has gone on less support has been needed. The project is working well due to the commitment and hard work of all involved.

There is still sadly hunger and malnutrition, leading to child deaths in the area we are working in. This is due to the ban on practicing agriculture (due to being a World Heritage site) and to drought and poverty. The education and other initiatives we are working on will help these determined people to escape from hunger themselves.

PWC (Pastoralist Women’s Council) have made a Youtube video about this awful situation.  Here is the link: https://www.youtube.com/watch?v=xJYP2-x_Uik

I have copied the following article from the website of ‘Just Conservation’: http://www.justconservation.org

‘A network for all who care about the conservation of our world and who want to see it achieved with justice, compassion, dignity and honesty.’

Sunday, 14 April 2013
Ngorongoro Conservation Area
‘The last months (or years really) have seen a food crisis in Ngorongoro Conservation Area and I’ve got the information from Kinama Marite that the death rate that for the past 36 years has been around 3 children a month has increased to 12 to 15, and 17 to 20 during the dry season from July to November, and this is due to malnutrition. Livestock numbers have not recovered from the serious drought in 2009, there have been more droughts and the situation is worsened by forbidden access to key grazing areas and areas suitable for avoiding disease in this much vaunted multiple land use area to where the Maasai were moved from the Serengeti in 1959 and where their interests were supposed to take precedence.’
Published on 11 Dec 2012:Over the last six months drought has struck the Ngorongoro Conservation Area (NCA), located in Northern Tanzania. NCA is a UNESCO World Heritage Site incorporating the Ngorongoro crater, one of Tanzanias most valuable natural resources due to its tourism revenue, yet the indigenous Maasai population is currently starving due to government legislation and policies.

We are planning a Health Education project for the whole community to cover: Community Sexual Health, HIV/AIDS and FGM (Female Genital Mutilation) called ‘female circumcision’ locally. FGM is harmful to girls, but for the Maasai it is part of an important rite of passage to womanhood and marriageability. Change needs to come from the people themselves and can happen when all people understand the harm caused by this part of the rite of passage and can plan to make cultural changes together.

At the community’s request we have arranged for a pilot training workshop for respected elders, cutters and men and women of all ages from Nainokanoka ward. This training is to be given by Maasai people, who have had success in their own communities, with whole community decisions to stop practicing female ‘circumcision’. Depending upon the responses and conclusions of this pilot study, the trained people, can then go on to teach the rest of their community what they have learned. When this information is disseminated throughout the community they will be able to plan their own way forward for a ceremony to womanhood without the ‘circumcision’ in the light of their new knowledge. This first training workshop will be held in Noonkodin School, Monduli Juu, this December. We have invited trainers from the organisations ‘SAFE Maa’ and ‘Aang Serian’.

We are having our first WTWT Quiz Night on Saturday October 19th 2013 from 7-11pm in Weston Turville Village Hall, School Approach, Main Street, Weston Turville, Aylesbury. HP22 5RW to raise funds for our work. Tickets are £15 to include a meal, with a vegetarian option, and there will be a bar and a raffle. If you would like tickets please contact me by phone or email (below)

We are hugely grateful for all your financial support and your encouragement for all our work. Without you we could not do any of this.

As always, our expenses and administration are paid by ourselves, so all of your donations go directly to the community projects.

If any of you would like to make a donation towards our projects, or set up a standing order, our bank account is: ‘Weston Turville Wells for Tanzania’ at Lloyds TSB, account number: 00087400, sort code 30-90-38. Cheques can be made payable to ‘WTWT’ and posted to our address below.